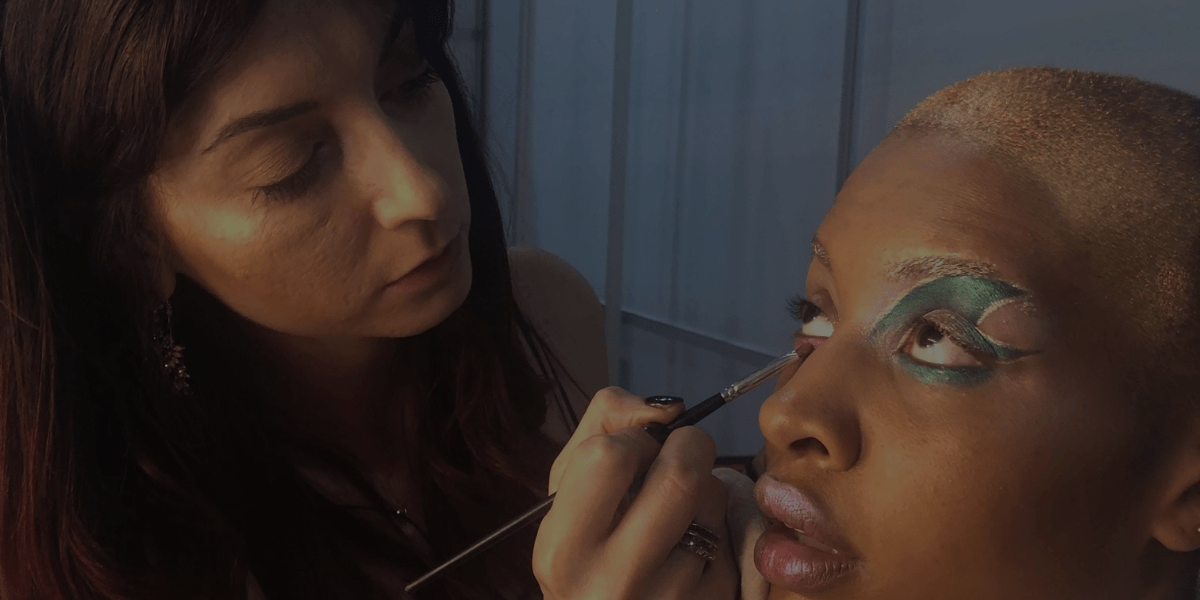 After completing a diploma of history of arts at La Sorbonne University in Paris, Charlotte Ravet decided to follow her true passion. After signing up for makeup artist classes, she began studying the craft. The techniques learned from celebrity makeup artists, combined with her passion for drawing and painting, led her to develop a unique method of application for corrective and artistic makeup.

Her natural gifts didn’t go unnoticed. Charlotte’s talents were in high demand as she worked for major European television stations, as well as on celebrities. Robbie Williams, the cast of the hit TV show Glee, and presenters of major events (such as Paris fashion week) are just a few of her many notable clients over the years. She also began presenting live seminars at L’Oréal Paris!

In 2014, Charlotte decided to open her career internationally, and moved to Australia. It was here that she began collaborating with top Australian photographers. Her innovative versatility was shared with the world through:

She has developed educational programs as a leading brand consultant, and has even created her own masterclasses for professional makeup artists! In 2018, Charlotte was awarded Best Makeup Educator for the Australian Makeup Industry Awards. Throughout her career, Charlotte has been nominated for and won countless other awards. Truly, they are all a testament to her skills.

After becoming the international makeup artist and retail education representative for the brand, By Terry, Charlotte now shares her MUA career between France and Australia. Professionalism, vibrancy, and outstanding skill have made Charlotte Ravet a sought-out industry expert by professionals and students alike! 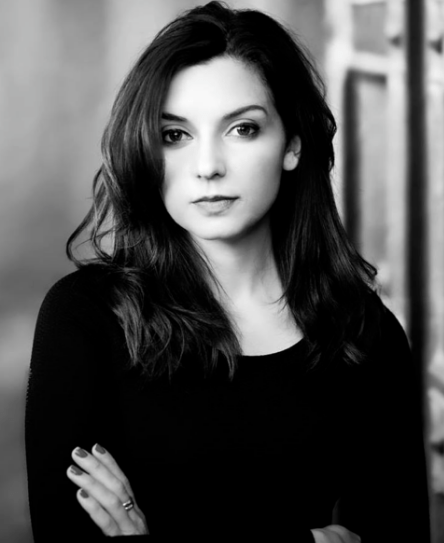 1. Where did your love of makeup come from? When (and why) did you decide to become a professional makeup artist?

I’ve always had a passion for art and drawing. My dream was originally to become a costume designer, or an archaeologist. After completing my Bachelor of History of Art, I realized that what I actually needed to do was be able to create with my hands. I was looking to learn a skill; something that would allow me to travel and live different experiences every day.

The idea of becoming a makeup artist came naturally. I didn’t know much about the industry before I started looking into it. Makeup artists weren’t as popular then as they are now. I visited a few academies, signed up for makeup artist classes, worked as dishwasher to pay for my studies, and never looked back!

I quickly became passionate about makeup as I was learning it. I had the feeling that what I was seeing or drawing on paper was something I could actually create on faces. I had an amazing makeup trainer. They offered exceptional techniques that were based on measuring face proportions, and creating a full face makeup look using only primary colors. Once you master these techniques, you can pretty much do anything!

2. Tell us about your makeup business, and the kinds of services you offer!

Well… I feel like I’ve done a 100 different jobs centering around being a makeup artist. This what is fantastic about having a skill – it opens up so many more doors for you than just job opportunities!

I started by doing makeup in the TV industry, as well as location shoots in Paris and across Europe. Then I had the opportunity to work with major fashion designers – such as Prada and MiuMiu – as the head of makeup for their private events in Paris. From there, I decided to learn English in order to elevate my career to an international level.

Once I’d moved to Australia, I started working for private clients. I worked hard to develop my professional network by getting involved in various productions and fashion projects. I also started teaching for academies. I’ve imported and developed a professional makeup brand through masterclasses, which quickly became popular. In fact, I was granted the title of ‘Makeup Educator of the Year’ back in 2018!

I know also work for the brand, By Terry, and am responsible for developing the educational content, delivering training for the brand, and illustrating/creating different looks.

These days, I’ve also developed a love for creative makeup, and want to focus on this type of work for now. I feel I have still so much to learn and explore!

3. You’ve done a lot of editorial work over the years. Got any tips for aspiring makeup artists who are interested in specializing in this field?

My main recommendation would be to plan ahead! It might take time to earn money as an editorial makeup artist. Take part in stylized photoshoots. The most creative projects are rarely the ones we’re paid for – but they show off our skills to potential clients!

Magazine companies often don’t pay much for a creative series, but getting yourself published in a renowned fashion magazine is one of the best ways to advertise your work. It also helps to keep up with current trends. Explore new challenges and never stop searching for new inspiration!

When I do an editorial shoot, it’s not work – it’s a passion. I’m pretty sure a lot of makeup artists would tell you the same thing.

4. Why do you feel that makeup artist classes are critical to becoming a successful MUA?

Professional training is the single most effective way to learn how to apply makeup properly – and for ALL types of work!

Without the right makeup education, you can be an amazing artist in one area, sure. But if you lack the skills in every other area of makeup artistry and don’t understand basic makeup theory and techniques, you’ll have a much smaller opportunity for real success.

5. What are 3 secrets to your personal success as a makeup artist?

First, always be professional! I want all of my clients to be extremely satisfied with my work. It’s important that I never fail to leave a good impression.

Second: find the right balance between relying on proper techniques vs. your creativity. Personally, I love breaking down a makeup plan and  searching for what’s working (or not working) in an image. Being creative is about discovering this fine line between what’s technically impressive, but also visually beautiful.

It’s sometimes hard to explain. As an educator, I can teach techniques, but I can’t teach taste. Creativity can only come from within the individual themselves.

And third: never convince yourself that you don’t still have room to keep learning. This is what keeps me going. Despite how awful COVID-19 has been, this year has also helped to me pause, think about where I was, and figure out what I want to do going forward.

I’ve looked at all my work, identified where I want to improve, and planned out which new skills I want to learn. Part of being an artist is being humble. You are never going to master your craft 100% – and that’s okay! Think of it as a never-ending opportunity to expand your skills and gain new knowledge.

There will ALWAYS be something we can learn. As a makeup artist, I feel it’s really important to know this.

6. For all the aspiring MUAs out there, what are your top 5 tips for getting started?

My favourite image of 2019 and which has been shared the most. Thanks for the love! Happy new year! @flavialazarus_ @annissbarton . . . . #editorialphotography #editorialmakeup #print #magazine #makeupartist #illustration #blackgirlmagic #model #create #love #creativity #work #lovemyjob

7. Finally, tell us 3 surprising things about yourself! 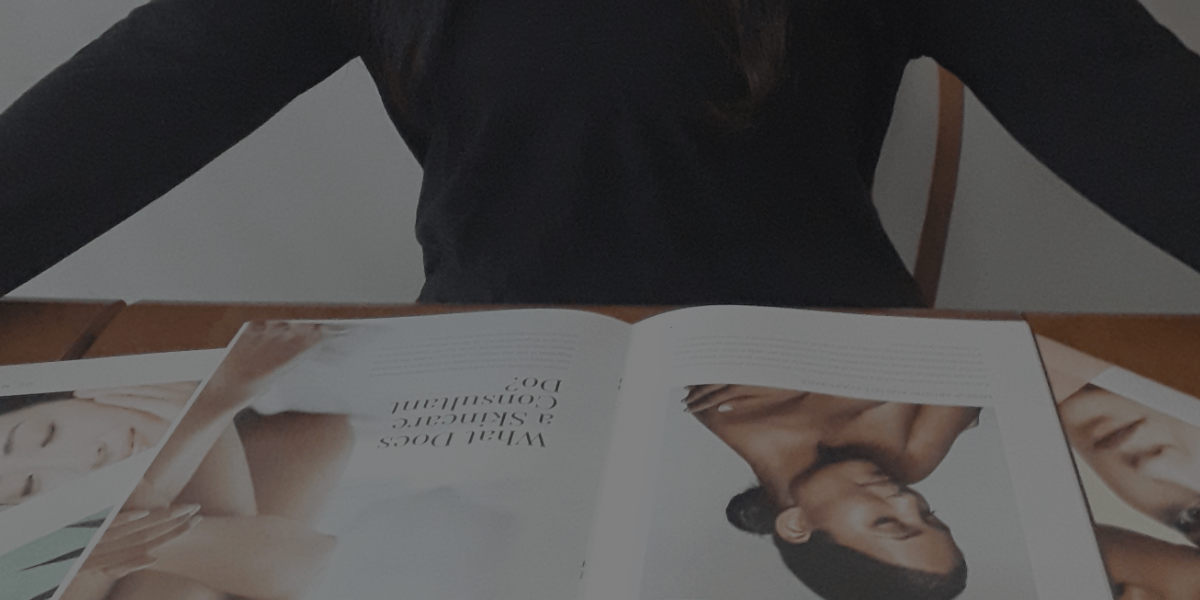