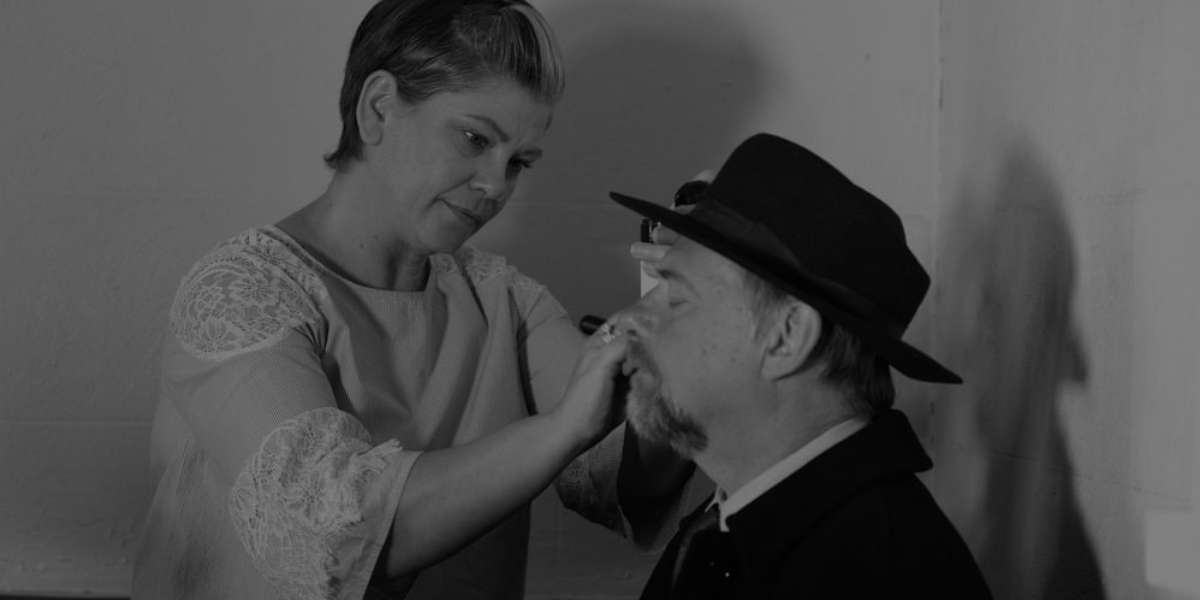 My Career as a Makeup Artist in the Film Industry

By Sloane SeguinAugust 19, 2020Education, From the Experts, Student Ambassador
No Comments

Caroline Edwards is a QC Makeup Academy Ambassador, as well as a current student in both our Master Makeup Artistry Course and Portfolio Development Workshop. She is the proud founder of her very own MUA business, specializing in makeup for film and television, Special FX, and personalized services. Today, Caroline discusses her career as a makeup artist in the film industry – and why her professional training with QC aided in her success!

Having the courage to follow your dreams, as well as your heart, is one of the most daunting experiences. But it’s also the most rewarding.

In terms of my career as a makeup artist, you might be wondering, how did my journey even start? It was quite simple, really. QC Makeup Academy kept popping up on social media feeds. Every time I saw it, I looked deeper and deeper into the school and their training. I was worried it couldn’t possibly be as good as it seemed. After all, you have to be careful with what you trust online these days.

But the truth is, I had no reason to worry. The more I learned about QC Makeup Academy, the more I was desperate to join! 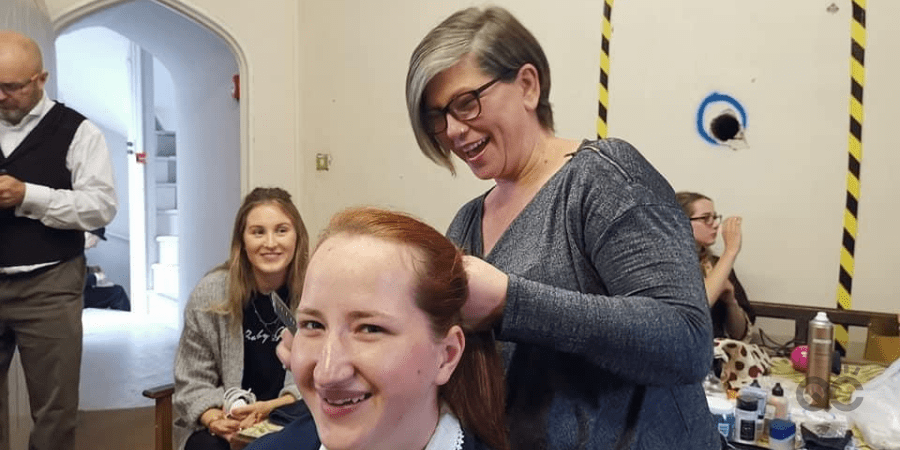 You see, I really wanted to learn how to do makeup the proper way, but my options were limited. Online schooling was my only option, due to my personal schedule. In-person makeup courses were out of the question. I’m a full-time mother, responsible for looking after my son who has special needs. I needed to be available to him, as all of his schooling and care needs are done from home.

But while I couldn’t necessarily leave the house in order to pursue makeup training, I’d realized that during the times when my son was getting home-schooled, I could also use that time to get a solid education from the comfort of my own home!

A major perk to QC’s online courses is that there is no pressure; no deadlines. I could take my training at my own pace, and work towards my career as a makeup artist on my own terms. So, I decided to enroll! I made myself a promise that I would read my texts daily, and devote at least 10 minutes a day top hands-on practice.

I’ll admit, I always try to go above and beyond when it comes to my studies. Since it’s something I’m truly passionate about, I find that I’m like a sponge, soaking it all up. Once I started, I couldn’t get enough! All of my spare time became dedicated to makeup. 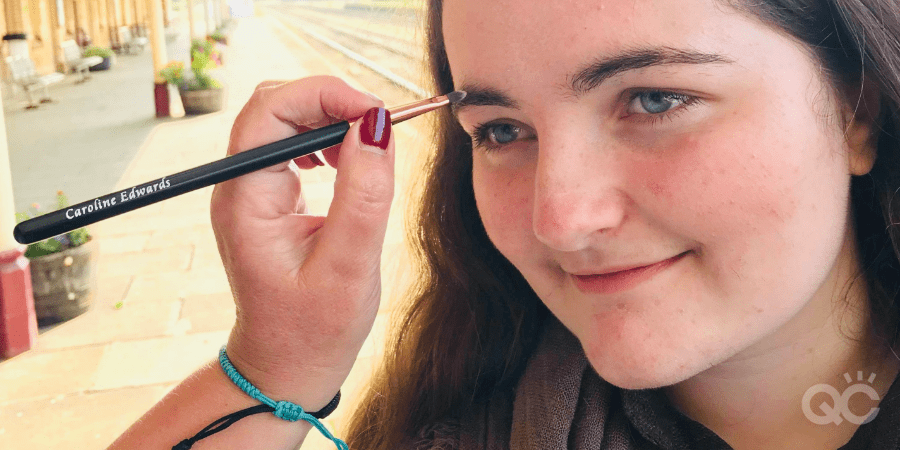 The thing about trying to perfect your craft is that you need to go into it knowing you’re never actually going to perfect it. But that’s part of the excitement! I’m fully aware that I will never know everything, and that’s part of what pushes me to want to keep learning. There will always be something new to master. QC Makeup Academy engages you; sparking this fiery passion from the very start.

The course materials are well thought-out and very detailed. There are plenty of texts and videos to help mix up your learning experience. I love that I can re-read (or re-watch) anything at anytime, for as many times as I like. For this reason alone, I believe I’ve learned so much more than I would have in a physical setting.

Alongside this, the community I’ve become a part of has been invaluable. Particularly, the chance to network with my tutor, Nathan Johnson, as well as other QC students and grads. Honestly, I don’t think I could get better support anywhere else if I tried!

For example, QC has a Virtual Classroom where the QC community can get together, discuss the industry, and support each other. Everyone’s so eager and willing to provide helpful feedback and cheer you on in your journey! 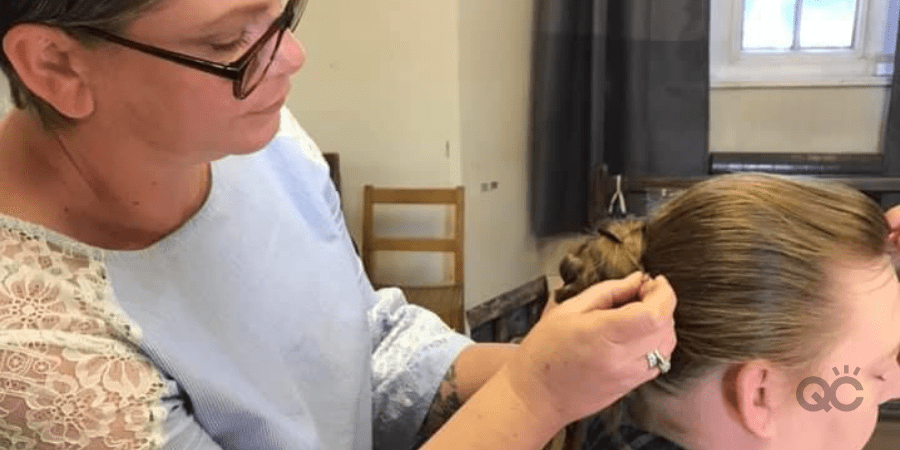 The feedback you’ll receive from QC’s tutors will be personalized and tailored to your own work. It’s never sugar-coated, but it’s always beneficial. Your instructor will really make you think about your work. Some questions I’ve been asked by my tutor included:

Your makeup education will train your eye, and teach you how to look at every fine detail. Nothing is off-limits! This is where the ultimate distinction is: a good school will teach you how to apply makeup. A great school will go one step further, by teaching you to understand why you apply makeup the way you do. This the true secret to successfully launching a career as a makeup artist, and making a name for yourself that will last for years to come!

So, would I recommend QC Makeup Academy? Without a doubt!

Thanks to my training here, I’ve since been able to start my very own bridal business. I’m proud to say that this business has so far garnered a lot of success! On top of that, through my personal network, I was able to branch out into the film and television industry, too!

Taking My Career as a Makeup Artist to the Big Screen

Thanks to a friend, I was offered the chance to work on a filmset as a makeup artist for a day. I don’t believe this would have been possible without my fantastic training from QC Makeup Academy. I can’t even describe for you what that opportunity felt like. It was the most incredible day!

I got to see how a movie is put together, and let me tell you: the amount of cast and crew involved for a single project is downright insane. As part of my role that day, I was given a set number of cast members to work on. It was my job to do both their hair and makeup.

In order to know the kind of hair and makeup that was expected of me, I was provided with a brief, which I had to follow closely. Once I finished with each cast member, they were then checked over by the head of makeup. Once given the green light, they were good to go to set. While the actual filming was taking place, I had to stay extremely quiet and remain on standby, in case any checks or touch-ups were needed.

Sometimes, though, a small opportunity can actually open the door to a much larger one! As it so happened, what was supposed to only be a single day of work turned into me staying on with this film for an entire year!

The film itself is a rather harrowing story, set in Victorian times and based on a true story. Feel free to learn more about it on Instagram, if you’re interested! 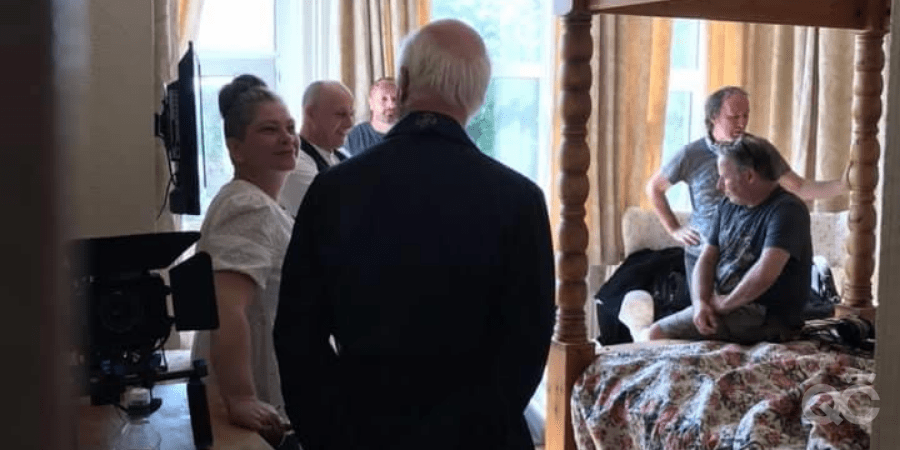 Thanks to my professional training and this unique opportunity, I’ve since discovered my niche. I have found that my career as a makeup artist is being geared towards the film industry. Moving forward, this is where I’ve decided I want to stay and focus my efforts.

As a parting note, I just want to take a moment to say anything is possible for you. It doesn’t matter what your age, gender, background, or other commitments are. If you have an interest or passion for this craft, you CAN have a career as a makeup artist. This is an industry that’ll never be too full of talent. There will always be room for you, if you make room for it.

On that note, I urge you to join QC Makeup Academy. My experience with QC has set me up for the most amazing journey, and I know it can do the same for you. So, get that classical training under your belt, and chase those dreams. They are waiting for you!

Until August 21st, get TWO makeup courses for the price of ONE! Enroll in our internationally-leading Master Makeup Artistry Course and choose ANY Advanced Course for free!