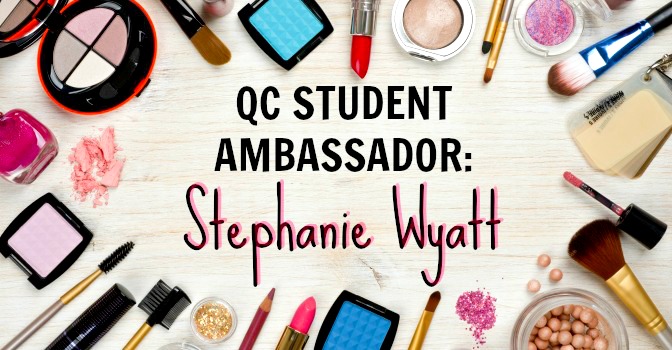 
In this helpful tutorial, QC Student Ambassador Stephanie Wyatt shows us how to create a glitter-free, holiday makeup look! As Stephanie is so used to adding glitter into her makeup looks during the month of December, this was a tricky look to create. However, her creativity and talent make this unforgettably festive (and stunning!).

Watch the video below and learn how to put together a glitzy, glamorous holiday look without any glitter.

To smoke her eyes out a bit, she uses MUA Makeup Academy’s Eye Define Liner, just to create a nice wing. For her mascara, Stephanie chooses Maybelline Big Shot, which is very voluminous and makes her lashes stand out.

Moving onto concealer, Stephanie uses Lasting Perfection Concealer by Collection Cosmetics, which is her go-to concealing product. She applies it under her eyes and on her face, and blends it using her Real Techniques Miracle Complexion Sponge. For her foundation, Stephanie chooses the Estee Lauder Double Wear Foundation, which is her absolute favorite winter foundation. To brighten the area under her eyes, Stephanie uses the pointy end of her sponge to blend out her NYX Photo HD Concealer.

Using Laura Mercier Translucent Powder, Stephanie takes the pointed end of her blender and bakes the makeup under her eyes. For contour and bronzer, Stephanie uses the QC Makeup Academy Contour Palette. Using a contour brush, she applies the shade to her cheeks and forehead. Very lightly, with a contour brush, Stephanie applies a bit of bronze color from the palette to her face. Next, she uses the QC Blush Palette and applies the shade to her cheeks. Moving on to her brows, Stephanie applies Makeup Revolution’s Brow Pomade with an angled brush, and fills in her brows, following their shape.

Stephanie then uses a small bit of setting powder to wipe away the bake. For full coverage, Stephanie uses the same setting powder all over her face to make sure her makeup stays put. Then, using QC’s new Highlight Palette, Stephanie uses a small brush to apply the Luna shade under her brows. She also uses the highlighter on the inner corners of her eyes, and chooses the Vision shade for her cheekbones and the bridge of her nose, applying it with a fan brush.

To finish the look, Stephanie applies a brown shade under her eyes with a fluffy blending brush. She sets her face using the MAC Fix Plus Setting Spray, and then applies Maybelline’s Super Stay Matte Ink in a festive mauve shade (“Believer”) onto her lips.

Love Stephanie’s bold lips? Find out how to master the dark lip in another of her tutorial videos!

Choosing a Makeup Academy Online: Is QC Right For You?

Choosing a Makeup Academy Online: Is QC Right For You?