My Makeup Career During COVID

Dream of starting a makeup career – but worried that COVID will hurt your success? This is a very common concern, but one that should NOT deter you from pursuing your goals! Today, QC Makeup Academy‘s Student Ambassador, Nadia Calabro, is here to discuss how the pandemic has affected her journey… and how she’s been overcoming the challenges she’s faced! 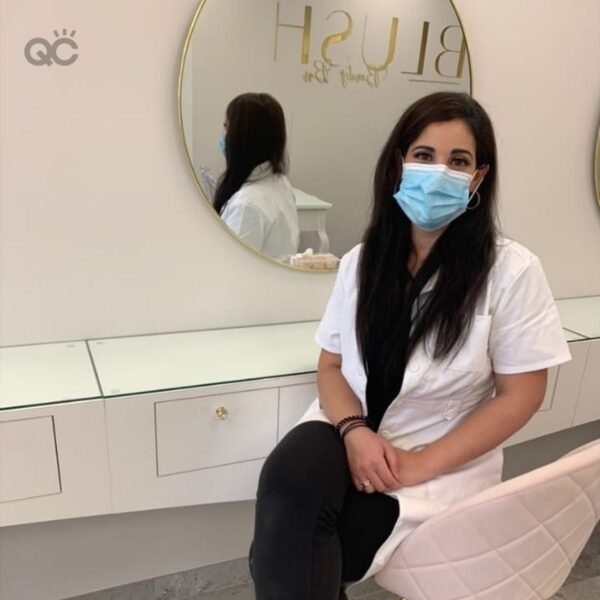 A Little About Me

My name is Nadia Calabro. I’m a graduate and Student Ambassador of QC Makeup Academy. I’ve graduated from the Master Makeup Artistry Course, the Pro Makeup Workshop, and the Skincare Course. Each one of these classes gave me a different set of tools to ensure a successful career.

I was living my dream and felt on top of the world… But then the world around me literally fell apart, and down I went with it! If you haven’t figured out the villain of my story yet, I’m of course talking about the big, bad COVID pandemic!

My Makeup Career Before COVID

Before the pandemic, I was in the midst of an uphill climb to the top of my industry. I had just opened my own freelance business, Beauty Beyond the Mirror, and my name was getting out there more and more with each passing day.

When I first graduated from QC Makeup Academy, I was at the top of my game. I was getting booked consistently; having clients in my chair through the week, every week! I’d even landed my dream spot at a beautiful boutique-style salon where I was able to offer my services!

Moreover, I was participating in photoshoots and designing my own. I was booked for weddings, as well as all kinds of different special events. My skincare training through QC had also allowed me to add skincare consulting to my service menu. As a result, I was helping woman get their skin back to health! I was offering specialized facial services to help woman and young teens take care of their skin.

Most importantly, I had even begun teaching woman how to apply everyday makeup looks to themselves, through just a few easy steps and by using products that worked for them. 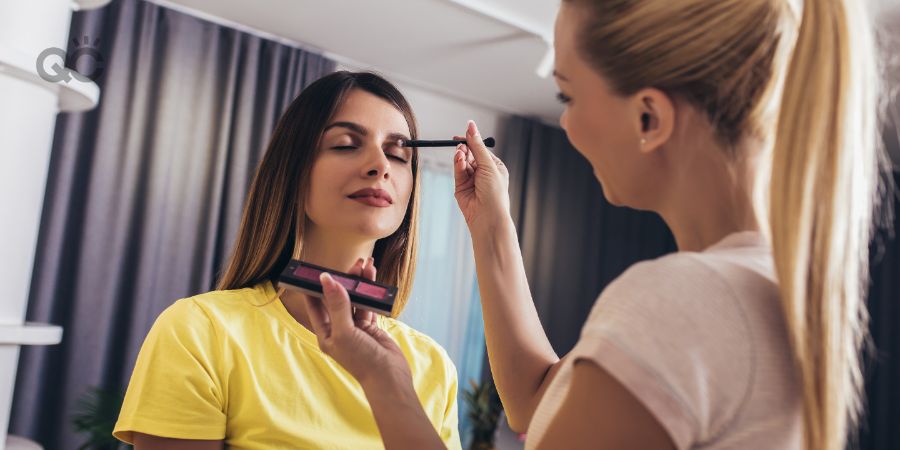 Then Came the Pandemic…

As I write this part, it’s hard not to feel consumed with sadness… because just as quickly as my makeup career started, it felt like it had all suddenly fallen apart!

When COVID first hit, I was still working. At first, people were still celebrating special milestones and events. As such, my calendar was filling up! I’ll be honest: I was grateful in the beginning to still be working, but I was admittedly pretty nervous, too. In the back of my mind, I knew that the worst was yet to come.

So, I was trying to do as much as I could, in whatever time I was being given.  Then the ever-so-dreaded reality of what I knew was coming finally happened… Ontario (where I live) entered its first provincial lockdown.

As a result, we were confined to our homes. Schools were closed, businesses were forced to shut their doors, and we were unable to be with our families – let alone our clients. There was nothing to be done but stay at home, and ride out the tidal wave that was going to wash away life as we knew it.

At first, the lockdown was only support to last for two weeks. We were all told that we would recover and come out stronger. But this turned out not to be the case. Instead, the tidal wave quickly turned into a tsunami! Instead of recovering, we got completely wiped out. Two weeks wound up turning into three months.

With each passing day, everyone grew too scared to carry on with their regular lives. People were no longer celebrating anything – and makeup services became practically nonexistent.

Before we could even get back on our feet, we entered our second provincial lockdown. Once again, it felt like we were all brought to our knees. Faced with the prospect of yet another few months of forced closures, everyone’s hopes were dwindling by the second.

The thing is: when that second lockdown finally got lifted, life never really went back to normal. While everything else was running as usual, makeup services were still not allowed. This was because only services that involved wearing a face mask were permitted – and, of course, makeup doesn’t fall into that category.

But that was my ENTIRE career! Thus, not only could I not do makeup; I also couldn’t do facials or skin consulting either. Needless to say, I was devastated. And just like the song that never ends, Ontario wound up going into a third stay-at-home order. While it was eventually lifted as of June 2nd, it still feels unclear as to what the next plan of action for our province will be at this time.

I’ll be up front with you… It’s been hard not to give into the temptation of raising a white flag in defeat. There were many times I almost did. But ultimately, I chose not to – and here’s why…

Almost Giving Up On My Makeup Career

Let me start by saying that if you’re reading this and have been (or are currently in) a similar situation, my heart goes out to you. Truly. Personally, I have experienced some of my lowest lows over the last year and a half. So, I know the struggle is real. That feeling of helplessness is a weight that’s hard to carry. Furthermore, the realization that you are powerless in your own journey is a very hard pill to swallow.

I’ve had many days where I thought to myself, “That is it! I’m accepting that my time is done, my makeup career is over, and I’m going to find something else to do with myself!”

Ultimately, I knew that I’d never be able to find anything else that made me as happy.

Now that I’m out of the darkness and some light is finally shining in, I realize that what was stopping me from giving up was my passion. That, and the fact that I knew my makeup career wasn’t done yet. Heck, it had hardly even started! I had so much that I still wanted to share with the world; so much I wanted to prove to myself.

How could I turn my back on it all now?

So, I shook off the idea of giving up! I told myself to stand tall and be better than what was bringing me down. Yes, the reality still remained that I couldn’t use other people’s faces as my canvas… But I could still use my own!

What’s more, I could try new looks on myself and perfect my art before I entered the working world again – and man oh man, have I been doing that! Instead of seeing my newfound free time as a curse, I’ve started seeing it as a blessing. After all, I can use it to get creative, test my limits, and experiment with areas in makeup I never tried before.

I’ve also taken the time to go back over all of my books and videos from my QC Makeup Academy courses! Working in the real world after graduating, I knew there were bad habits I’d picked up again. So, refreshing myself has allowed me to break those habits and bring my skills and makeup approach back to the basics.

Furthermore, I’ve also focused on connecting with artists on social media, in order to build professional relationships that I can potentially benefit from in the future. I’ve reached out to people that I knew were holding off on getting married, and have offered my services to them when the time comes. Importantly, I made a conscious choice to not let people forget my name the way I had forgotten it myself!

Ultimately, I know that all this practice and rewiring of my skills will only make me better in the future. As a result, I’ve now allowed myself to appreciate this time I’ve been given. I’ve allowed myself to be thankful for the temporary pause in my makeup career, because now I can watch and appreciate each brush stroke on my face. I can appreciate the wonders of what I can create, rather than just doing it to get the job done.

Once I slowed down, I realized that I had begun to apply makeup through habit – and not appreciating the art. But not anymore! Instead, I’ve fallen in love with makeup all over again! 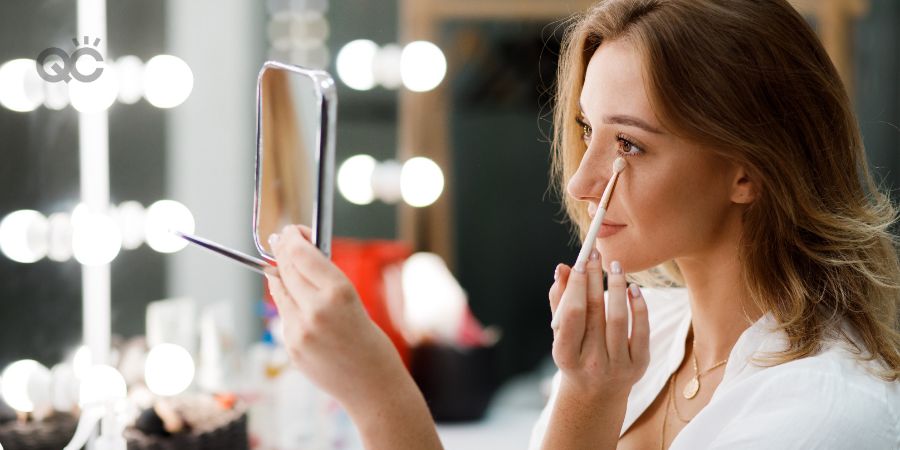 Getting My Makeup Career Back on Track

Over the last year and a half, I’d been feeling as though I no longer had a lot to offer anyone in this industry. I’d even convinced myself that I had nothing to offer the current and future students of QC Makeup Academy, in terms of being a Student Ambassador, because I was so defeated at one point.

But with new perspectives, everything seems so much clearer to me now! I love giving people advice on their techniques and skills; helping them to evaluate their looks and better themselves. And I will continue to do that! But for now, I am choosing to use my voice for something else.

Today, I am choosing to use my voice to tell anyone who feels like I did to straighten their backs, stand tall, and look up and onward. Life before COVID was great, but the future can be even better. The only way that anything has power over you is if you allow it… So, choose to be stronger!

Choose to make the best of the worst possible situation and come out with guns blazing. The global pandemic took a lot – and this is a fact the whole world is a united front on. But COVID doesn’t have to be the element that takes your dreams away, too.

You are the same person you were before COVID, and you can find that person again. Start by picking up your makeup brushes and creating a masterpiece on your own face. Then look in the mirror and remind yourself why you started doing this in the first place.

Finally, grab onto that dream that was buried by darkness. Hold on tight, never let go, and get ready for a lifelong ride. Yes, it might start off bumpy… but it’s sure to land on beautiful, calm roads!

Start YOUR makeup career in as little as 3-6 months by getting trained and certified from the comfort of home with QC Makeup Academy!