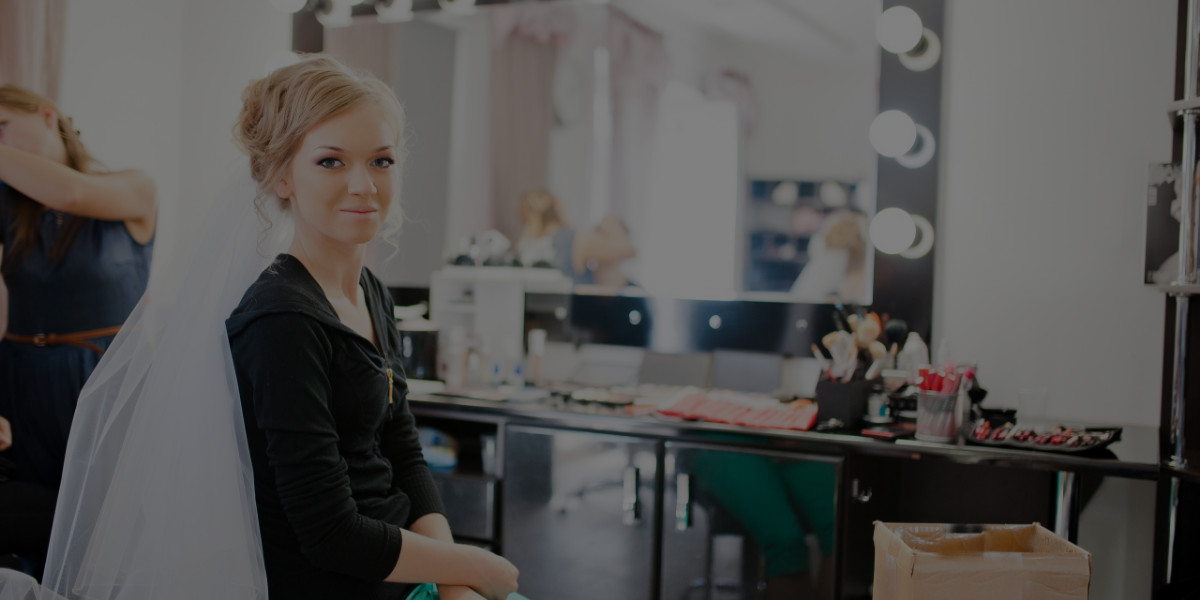 What It’s Like to do Makeup on Live TV: Part 2

Last week, Master Makeup Artistry student Kayla Wilson told us how she prepared for a freelance gig with CBS. This week, she dishes all about her experience doing makeup on live TV!

You’re going to be on live television doing airbrush work for the first morning segment, and you oversleep until 10 minutes before you are due to leave the house for the commute. What would you do?

Well, I chose eyebrows and hair. The night before the gig, I had to engage in a lot of self-talk. I was anxious, but kept affirming, “Just do your thing, it will be okay.” It worked too well. The alarm went off at 2:45am (to allow the necessary 90 minutes that I needed for my own hair and makeup), but something happened. The next time I opened my eyes it was 4:14am, and I was literally shouting: “no, HOW-HOW?!”

I had to leave the house no later than 4:25am. I have never been more thankful to have packed and prepared every single element and item needed for both my outfit and kit the night before. A sleek ponytail, a decent mattifying layer of Urban Decay’s One and Done, and a focus on brows (#browstothefront), I dressed and flew out the door. Once I was on set, I felt better. Somehow I arrived right on time!

When I was younger, my mother used to quip, “Nothing ever starts until you arrive, Kayla. Don’t worry if you are late—you set the on-time standard.” Well, she was right. No one had arrived for the 5:00am call-time yet. The rest of the crew eventually started trickling for the 5:37am live-on-air. But by that time, I had already set up my table, and was working on a bottle of water to hydrate. 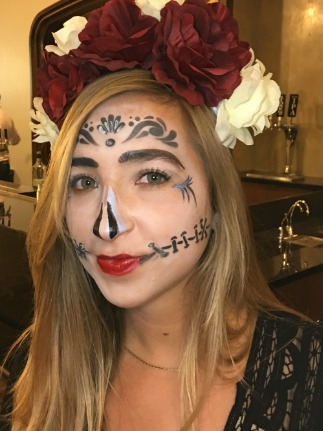 The CBS news anchor, Ashley Jacobs, worked with the cameraman on the best plan and angles to show off my work: they decided they wanted me to create a “nearly finished” look for the segment. After two of my three models had arrived, I picked the model who was less interested in a full makeup application. My goal was to have her look completed for camera, so then she could skip out to remove the paint from her face. Ironically, she was stoked about the look—and kept it on all day!

A lot of the makeup was pre-staged, and most of the airbrushing took place off-camera. To quiet the compressor, the production team opted to have me hand-painting during the segment, allowing me to show off finer detail work.

Working with the models

While I continued to work on the models, the speakers and presenters did their pieces. My boss cheered me on from the sidelines and kept saying, “This is incredibly impressive!”. She’s known about my freelance work for months, but I think it took this gig for it to really sink in.

My personal hairstylist volunteered to be my third model. For that I was thankful! Our history is based on a lot of trust— I give him free creative reign on my hair and in return, he gave me full creative license! His favorite color is purple, so I just let loose! He was the final in-depth feature and like the first model, I just did finer detail work on live-camera, reserving the airbrushing for off-air moments. 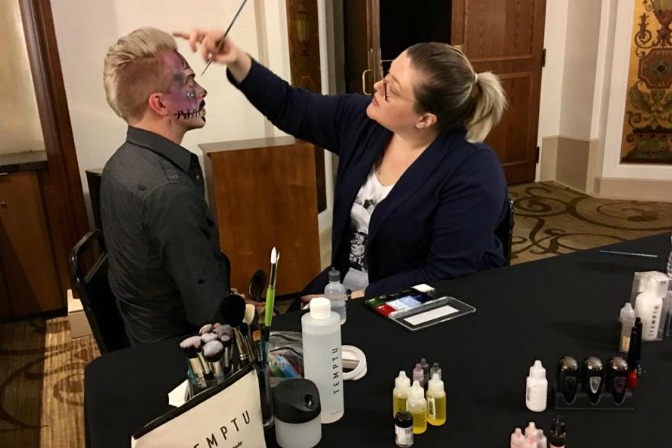 The second model had the smallest piece done. I only found out after the fact that she really wanted all-in on the face painting. I felt terrible! I made it up to her by creating a beautiful one-sided piece on the left side of her face — which was introduced to the live television audience. She loved it!

Under the bright lights

I was surrounded by the PR firm MeadsDurket, my boss, the models, the news anchor, and the cameraman for 2.5 total hours. Somehow, I was relaxed and composed the whole time. Definitely not what I was expecting after running in 2 minutes late!

Having the camera on you while working is incredibly odd, though. I was very aware of my posture and my best angles, so I made sure to move slowly and deliberately throughout the process. The lighting is what threw me off the most—-the camera has a built-in area lighting component for clarity, and it really does look like what one would imagine on the red carpet: overpowering, and a bright white-blue. 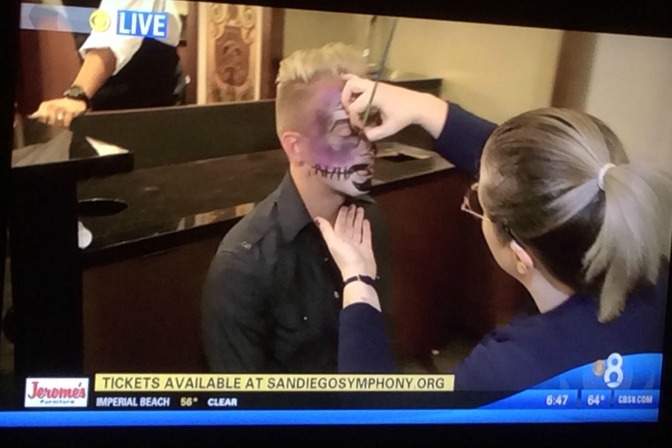 The live television segment went by in an absolute flash, and my phone was blowing up the whole time with acquaintances, friends, and family watching the segment. 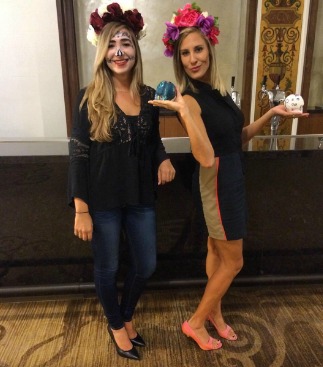 In order to be respectful to facilities, I didn’t clean my equipment post-television on the spot. I simply re-packed everything away neatly to clean later on at home. On my way home, I picked up a breakfast burrito and an iced coffee as a treat! Once I actually got home, I spent roughly 1.5 hours cleaning, organizing, and disinfecting my equipment, which is normal for me. I don’t take hygiene lightly—and it always takes a considerable amount of time. After everything was back in order, I took a nap and went on with my day.

The entire experience was a massive success! I really can’t thank everyone who supported me through it enough! A few tips: 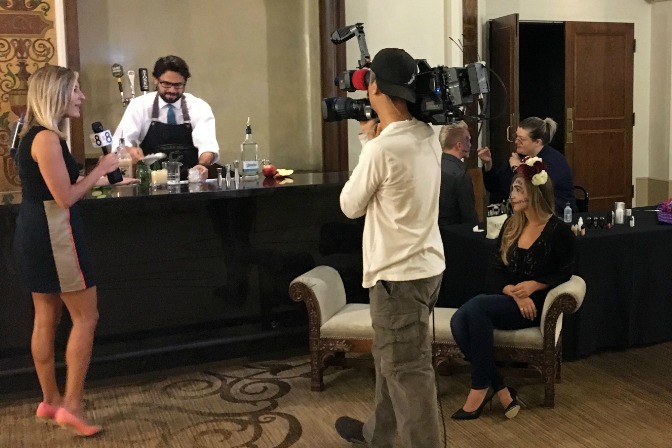 Want to learn more about how Kayla started freelancing? Take a look at our online makeup courses to launch your own career as a makeup artist!